There are many people who do well with a standard prescription for glasses or contact lenses.  They are the 80% of the population who benefit immensely from traditional eyesight and eye health examinations.  But the probability is that you’re reading this because you, a family member, or someone you know has problems that have not yet been evaluated or satisfactorily treated.

The evaluation that Dr. Press conducts typically begins where other examinations leave off.  We place a great deal of emphasis on how the eyes focus and track together as a team.  It is conservatively estimated that 1 out of every 10 patients has some degree of difficulty with convergence, which is the ability to use both eyes together as a team at near.  We see this frequently with school-aged children, whereas adults often have problems that plague them when driving.

Permit me to introduce you briefly to Professor Susan R. Barry.  “Stereo Sue”, as she became known through an article in the The New Yorker magazine written by the renowned neurologist Dr. Oliver Sacks, was in her late 40s when her visual world became unstable.  As she wrote in a letter to Dr. Sacks:

“It became increasingly difficult to see things at a distance. Not only did my eye muscles fatigue more quickly, but the world appeared to shimmer when I looked in the distance. It was hard to focus on the letters on street signs or distinguish whether a person was walking toward or away from me. . . . At the same time, my glasses, used for distance vision, made me far-sighted. In the classroom, I could not read my lecture notes and see the students at the same time. . . . “

There were two solutions that Sue Barry ultimately received for her problems that no one had tried before.  The first one involved prism, and as Professor Barry writes:

“Dr. Ruggiero placed a prism in front of my right lens that shifted the entire visual field of the right eye upward. . . . Without the prism, I had trouble reading the eye chart on a computer screen across the room because the letters appeared to shimmer. With the prism, the shimmer was greatly reduced.”

The second solution that Sue received was vision therapy centering on something that looks deceptively simple:  The Brock String.  And there is tremendous significance to her treatment.  Of all the procedures she did, this one involving a string with three different color beads was the most profound to her.  The lesson here is that a solution does not necessarily have to be complicated to be highly effective. 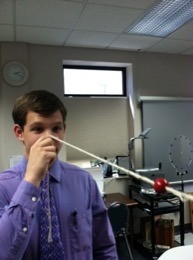